Hanging by a thread

The seismic shift to in-home working started out of necessity during the pandemic, but most people want it to stay that way. Maybe not to the same extreme degree – a hybrid is likely – but the genie is out of the bottle. So how can managers ensure remote working and collaboration remain productive and inclusive for the long term?

In between the first and second lockdowns in the UK, when roughly an equal split of respondents worked at home and in their workplace, we asked 1,001 people whether they preferred virtual or in-person meetings? A majority choose the former, hands down.

The top three reasons given for preferring virtual meetings were: 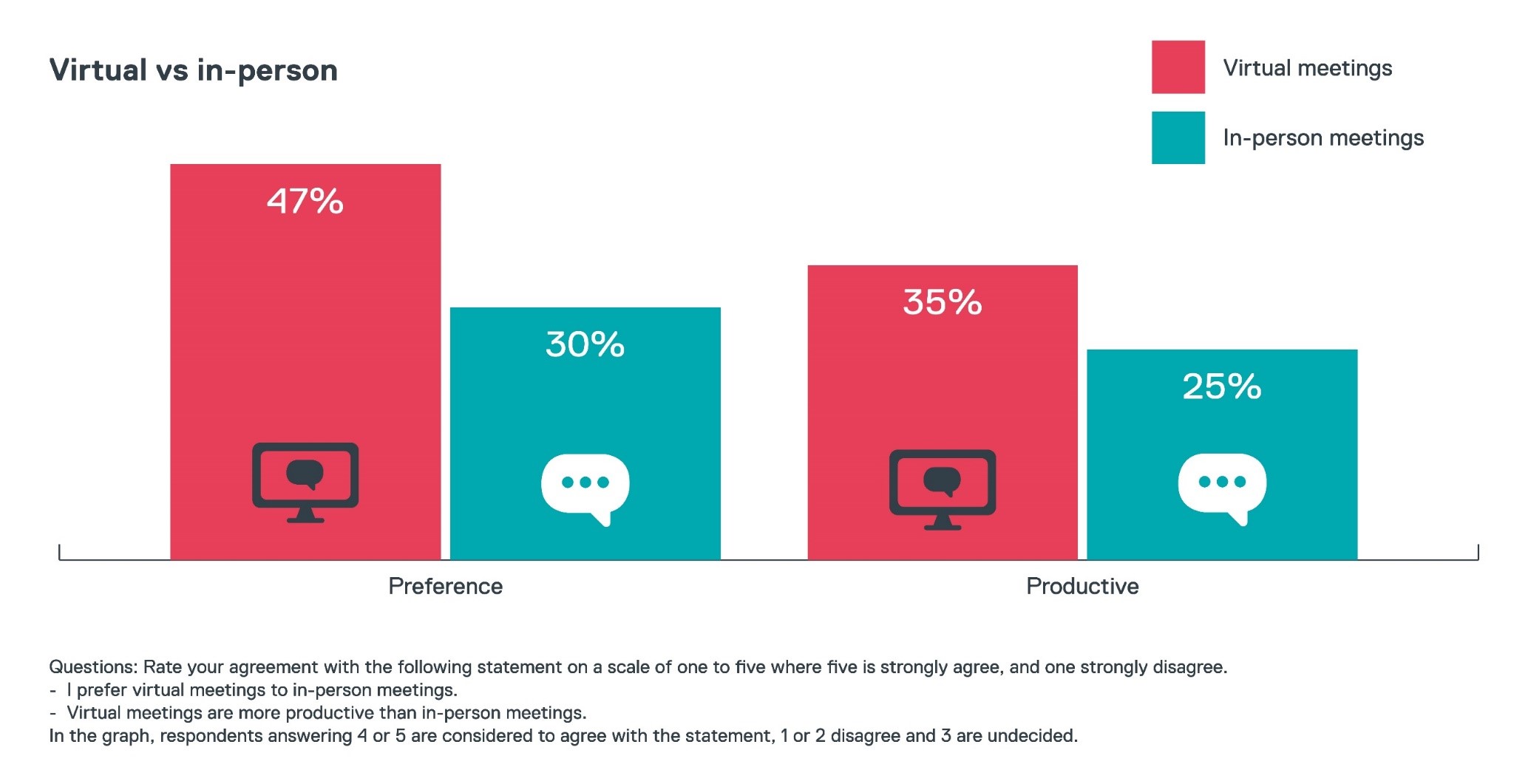 Most respondents also found remote meetings more productive. When asked why a recent virtual meeting was particularly productive, they cited “efficient and structured communications”, “high attendee involvement”, and “getting more relevant people on the call”.

Respondents also told us that when remote meetings are run poorly, it leaves them feeling disconnected and excluded. That’s understandable when you consider the absence of the social safety net typically present in the workplace – corridor discussions, chats over breaks, and work buddies toiling away beside you. However, if managers adjust their leadership style accordingly, remote working can be a vibrant part of the work mix.

Connect with people
Respondents appreciated the no-nonsense focus of virtual meetings but said they could lack the little things that make in-person meetings fun and involving. When asked what they miss most about meeting in-person, respondents most frequently cited:

Judging from respondents’ verbatim comments, managers need to find ways to recreate workplace social rituals in virtual meetings. Try giving people time to catch up before jumping into the business at hand. Anything from kicking off with a 30-second “here’s what’s going on with me” to breaking out into groups of three, café-style, for a few minutes.

To help make connections, it’s a good idea to have a virtual code of conduct. Ask people to keep videos on and use good lighting to be seen clearly. Keep mics on, too, so people can comment spontaneously, recreating the feeling of a conversation. It may mean meetings are occasionally interrupted, and some people might moan about having to get camera-ready, but the alternative is gloomy images of only half your team and unnatural silences.

Be inclusive
Think about a time your boss or teammates didn’t include you and how that made you feel. In our study, respondents said the number-one reason for switching off during virtual meetings was “feeling excluded”, even ahead of “boring subjects or speakers”. 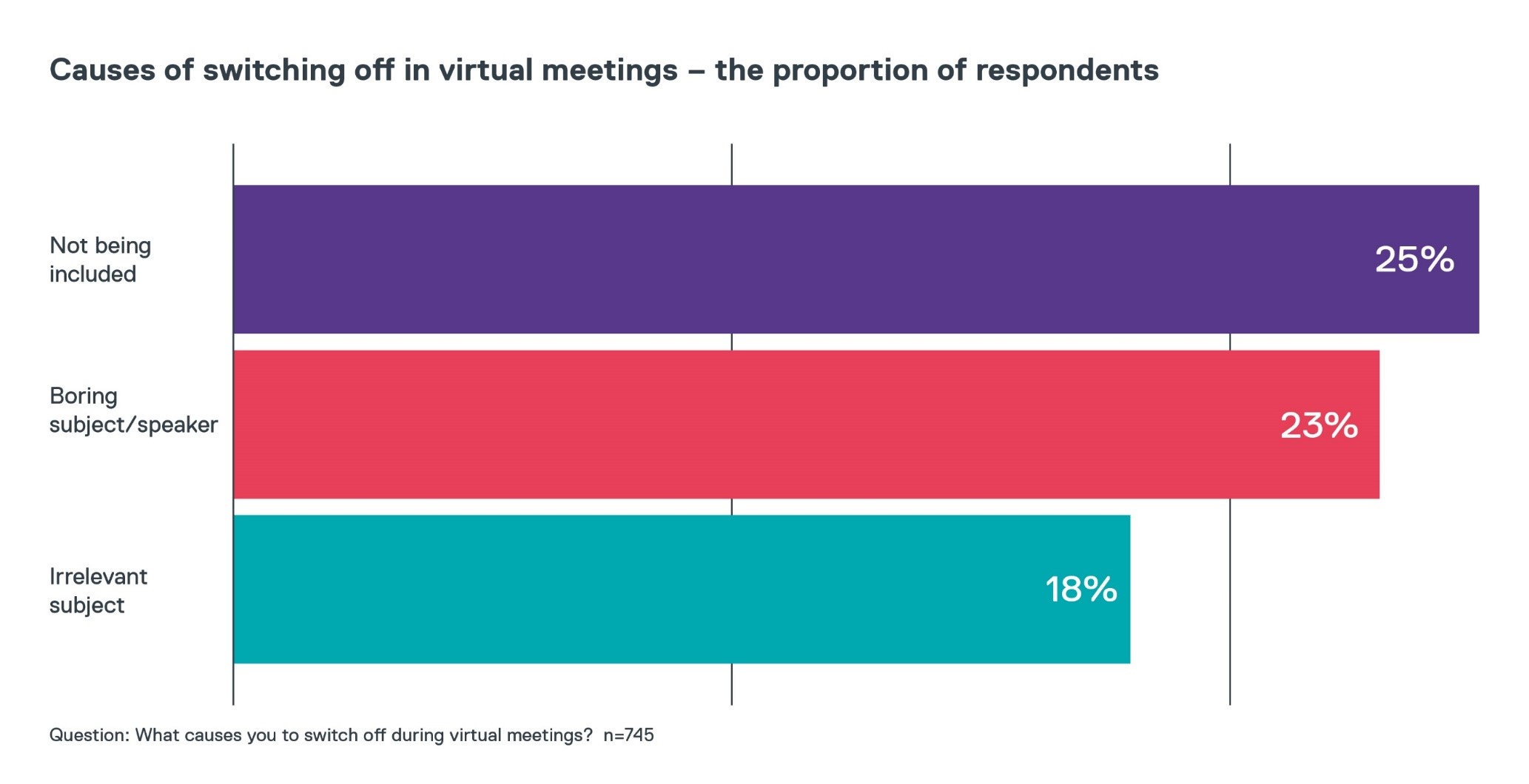 When asked what a meeting host should always do, respondents prized preparedness over all else – “a plan and structure”, “an inclusive approach”, and “managed communications” were top of the wishlist. People are calling out for virtual meetings to be run with their roles in mind.

Respondents repeatedly point out that they don’t want to feel like a spare wheel in meetings. If you are crystal clear about what you want out of a forum, you need only invite people who can contribute – and with no one having to travel, there’s less pressure to concertina every topic into a single meeting.

In the survey, respondents urged meeting hosts to stop participants from dominating or speaking over each other. As a manager, you can lead by example. Don’t talk for more than a few minutes without involving your audience somehow: ask questions, invite comments, or give people time to reflect. If you top and tail these brief interludes with simple instructions, you won’t lose control of the meeting.

Be mindful of generational differences
People generally prefer virtual meetings to in-person, but there’s a generational gulf. It’s a clear linear correlation – the older people are, the less comfortable they tend to be about meeting virtually. 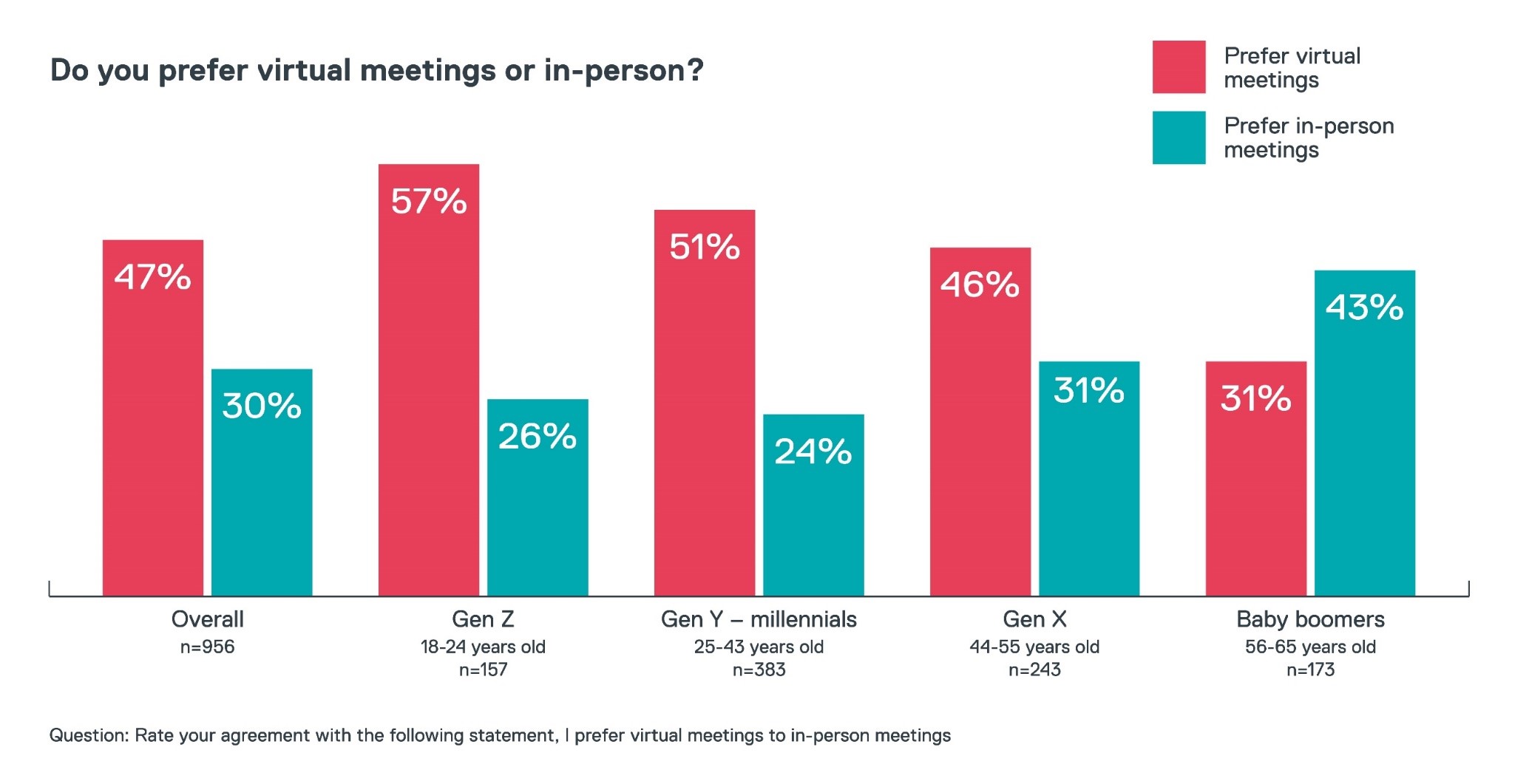 When asked to identify the worst thing about virtual meetings, older respondents said they struggled with the absence of visual cues from body language and facial expressions. Younger people are frustrated when technical issues arise. 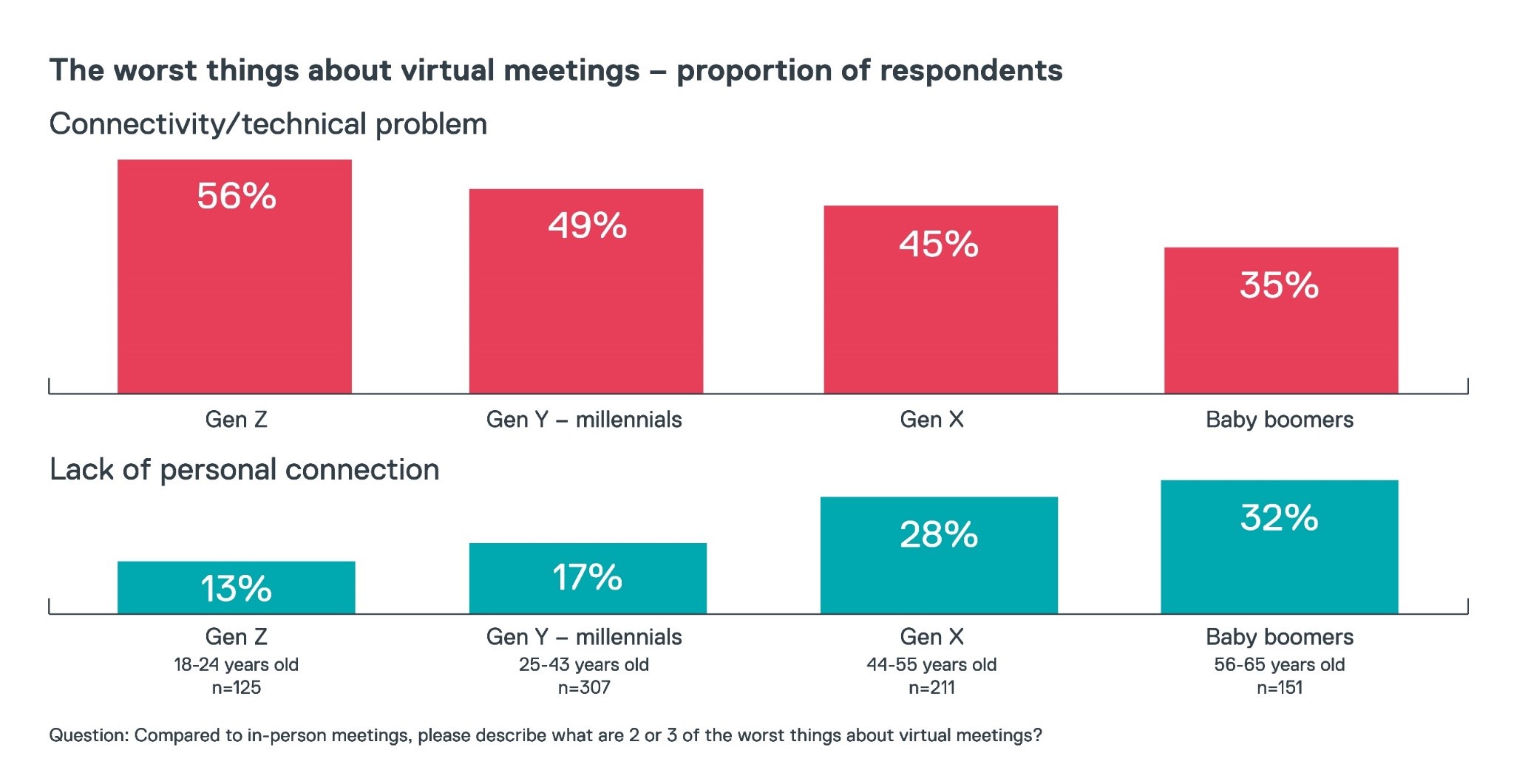 Make connecting easy – it’s half the battle – starting with crisp joining instructions. Be a warm and welcoming host, just as you would in a live setting. For every misstep and delay, your younger team members will be biting their tongues. When using breakouts, mix up your team members to experience working with different people. Seasoned team members will be incredibly grateful.

The excitement of getting your team back together in the workplace after months apart is understandable, but don’t throw the baby out with the bathwater. By expertly running virtual meetings that connect people, are inclusive, and are generationally aware, you can make remote working an involving and productive choice.

How to stay close when your team is far

Breaking down the virtual barrier.